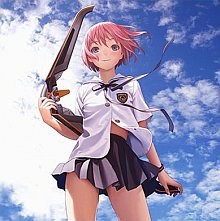 Shangri-la, the rebellion of nature

20 July 2011
The heat of the summer, although weakened by the truce of these days, is ideal to introduce this new editorial about one of the most original and fascinating stories of recent years. This is a series created in 2004 by Eiichi Ikegami as a light novel and later converted into manga and anime in 2009. The plot develops in Tokyo and we are in the middle of 21 century. Global warming caused by pollution of the ground has led nature to rebel against man. The towns are invaded by tropical jungles of poisonous plants with noxious fumes able to kill living beings and animals. The protagonist of the story is Kuniko Hojo, a young girl at the head of the Metal-Age, a group of rebels who lives in Duomo, a small district of Tokyo, struggling for survival every day.
The intent of Metal-Age is to be able to bring the entire population to Atlas, a huge technological tower built to house and protect the nobles of the country.
The story turns out to be a winning mix of different elements that give several interpretations , although the narrative rhythm is too slow at times lost in shaping all facets. In the foreground there are the characters, each with a well-defined personal history, original features and less stereotypical. From Momoko and Miike, two transsexuals through Ryoko Narase, Prime Minister of Atlas and the little Karin, a genius of markets and skilled entrepreneur. Among anime, manga and novels some of these characters change slightly in appearance and in some cases up to the role but maintain their own identities.
The second key to understanding leads to more naturalistic view of the issue , a proper stance and condemnation of how the man today is destroying the planet where we live for the usual economic interests that drive our society. The idea of a nature that rebels against human is far from surreal, we already suffer the causes of the warming and the greenhouse effect. The melting of glaciers, increasingly powerful hurricanes in America, the extinction of many species of animals are all sides of the same coin. Ikegami wanted to assume a phase of reforestation of the city, one of the possible future consequences, enough to put in the foreground a critical attention towards important issues.
Finally there is the section devoted to market analysis that in the story show speculative bubbles and financial crises which put the world economy into chaos. The chronicle of these days makes us partakers of events very similar demonstrating that even in this case the author in his imagination gave us a real insight dramatically greed of man when it comes to money.
Side from all we find a final table that caters primarily to Japanese history and legends . In particular the Princess Himiko, actually lived in 175 AD, and the two deities Izanagi and Izanami, which according to mythology created the land and Japan.
The animated version was the mainstream title of Studio Gonzo in 2009 before they suffer a massive restructuring following the economic crisis of 2010 and is 24 episodes long. Much has been invested in the project from Range Murata chara design, high-impact than their paper versions of Kenichi Yoshida and Karasuma Tasuku.
The latter is rather the manga designer which from March 2011 was published in Italy by Planet Manga. The style, more "futuristic" than the classic tract of Murata, allows you to have a history of equal value and very innovative design, maintaining a greater fidelity to the novel (the same Ikegami is the author of the dialogues in the manga).
That you read the manga, the novel, or watch the animated version I suggest to take a look at this title. It will not enter in historical anime but it’s certainly a product that will leave satisfied.
All News