A beautiful and successful experiment from a famous composer of a Progressive Rock sountrack. 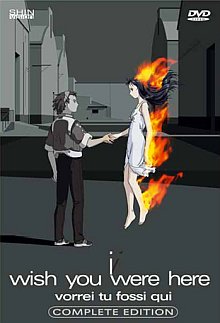 A few months ago I spoke of the phenomenon of JPop and the important musical background that hides it. This was just the tip of the iceberg of a submerged much wider and more varied world that brings together various musical genres masterfully orchestrated by great composers who have little or nothing to envy to the west ones. Hollywood has helped to educate and inspire these artists, who then diversified its production target by movie to tv series.
It is thanks to this that were born small pearls between the variegated music production, ever-present companion of every new issue in the field of Japanese anime. The route usually followed by the blockbuster film world is played with care in small-scale production, but the artistry is really high bill.
My intention is to present, in this series of editorials devoted to music, some less known authors in the Japanese productions who planted these little gems to listen to and enjoy outside of their animated context.
First on the list for having introduced a novelty in its kind is Kenji Kawai. Born in 1957 left the university from which he was studying to become a nuclear engineer and entered the Shobi Music Academy also left after only six months to form a fusion rock band called Muse. Later after he entered in the world of music business and have dissolved the old group he started to make music for commercial spots. Thanks to one of the voice actors for which he was working, he met the conductor Naoko Asari who directed him definitively toward the music for anime.
Kenji Kawai is the author of some of the most famous soundtracks among anime. We remember Ranma ½, Maison Ikkoku, Ghost in the Shell, Patlabor, You're under arrest, and Death Note’s live action. But one of the most characteristic work is undoubtedly the OST of I Wish You Were Here serie for home video made by Studio Gonzo in 2001.
Here emerges the background music of the composer who decided, by the nature of the story, to try to dock it a mix of Progressive Rock and Progressive Metal quite effective. Electric guitar riffs and unrelenting rhythms of drums are mixed in a variety of tempo changes typical of the genre. With them we can also find long guitar solos and keyboards, definitely inspired by fusion rock, which conduct the viewer between battles, fighting and civil war scenarios.
In Italian DVD made by Shin Vision, published in 2003 and now out of print, Kenji Kawai said in a brief interview of the work being done right now in the head like the idea of Progressive Rock music could embody the spirit of history. The band who took care to record the music received specific directives orientation of the pieces, also giving ample room for personal improvisation.
In fact, it is still quite unusual to approach this kind of music, multi-faceted, toward soundtracks. But the potential is almost limitless. In the past, similar attempt was made in the OAV Dragon Ball: The History of Trunks publish a different version for the American market. The latter instead of the original soundtrack contained a specially rebuilt it by taking the music from Scenes From a Memory, Dream Theater's famous album of 1999.
To Kenji Kawai goes the merit of having started a small revolution in the souls of music. We do not know if it will be able to follow up and breaking up the classic cliché for years together with this kind of production, but it certainly has been a precious pearl to be preserved for the history of world music.
All News