The Legend Of Zelda Twilight Princess

The new adventures of Link comes back in a must-have serie for all Zelda’s fans! 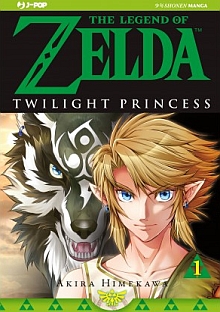 It was the summer of 2010 when J-Pop published in Italy the first three volumes of the paper transposition of The Legend Of Zelda saga, one of the greatest classics of all time among the Nintendo video games made by the great Shigeru Miyamoto (also creator of other milestone titles like Super Mario Bros). For an old fan of the saga the excellent work of screenwriting, adaptation and design by Akira Himekawa, pseudonym of two women mangaka respectively A. Honda and S. Nagano was a wonderful discovery.
7 years have passed by and now comes to us their last work which is undoubtedly the best in terms of quality, maybe thanks to major experience of the two mangakas and the more complexity narrative of the last stories from the Zelda games. Link is a young boy who lives in the peaceful Tauro village, near the Firone forest. His life will be upset by the advent of dark forces that will drag him into the Twilight World, turning him into a wolf. Here he will be helped by Midna, a little demon, to free himself from the prison in which he was threw and conducted inf front of Zelda, the Princess of Twilight, whom Link will decide to help to free Hyrule from the evil wizard Zant.
The story faithfully follows the development of the plot of the video game, leaving out some secondary aspects, but reporting all the main events that make up the adventure on screen. The first prominent element is the strong characterization of the characters that are developed in such deeper way, thanks also to the different nature of the media through which history is told.
The plot yet in the game is actually more complex and mature than the old Zelda and this helps to make the manga almost a seinen rather than a shonen. Even the choice to serialize it in a larger number of volumes helps to build a better story and to appreciate many nuances that are left aside in the game, thus overcoming one of the weaknesses of previous publications.
The Himekawa’s stroke have the same characteristics I had previously encountered in their first mangas: very mature and detailed, almost a cross between mangas and comics. Thanks to the presence of more dark and mysterious settings the design is now enhanced even more.
The Italian edition from J-Pop, like the previous ones, is always very accurate and well-made in 12.5 x 18 format for over 200 pages at a good cost of € 5.90. For those who are fans of Zelda this series is really not to be missed, waiting for future transpositions of Skyward Sword and the recent Breath of the Wild.
I take this opportunity to point out that the Perfect Editions of the old editions of the manga have been released. With the exception of A Link To The Past, which is a new unreleased edition, the others are all versions proposed in a new format with color pages. Given the not negligible price of € 15.00 in the book, I suggest them only to collectors because from the point of view of the contents do not change.
In the end I am pleased to announce that on 3 March 2018 I will finally put online the version 7 of HinaWorld since 8 years after the last update!
15 years have passed by from first version of the site and I wanted to take this opportunity to renew the graphics which will be more adaptive to mobile device. I will wait for you!