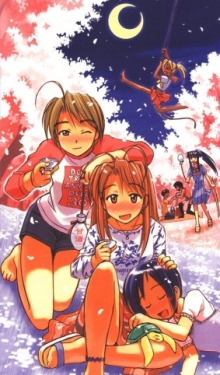 12 April 2021
If you are visiting these pages because your Love Hina fandom, the famous manga by Ken Akamatsu to which the site is dedicated, you will surely remember the legendary Sakura Saku theme sung by Megumi Hashibayara. This song, in the context of the anime, jokes on the parallelism of the "cherry blossom" (lit. sakura saku) which is also used as a phrase to indicate the "promotion of an exam", a referral to the promise between Naru and Keitaro to meet again together in Todai university. But the cherry blossom that is celebrated in Japanese culture with the hanami festival, holds a deeper meaning that symbolizes life and rebirth.
The origin of hanami dates back to very ancient times, according to the old Japanese book of annals even to the third century AD, while some legends indicate that it derives from an ancient monk of the city of Yoshino who planted cherry trees and others believe instead it was a custom derived from China.
Initially the hanami referred to ume, or plum trees, but with the Heian dynasty (794-1185) the Japanese court moved to Kyoto and hence the sakura, for their beauty, replaced the ume. During this period, the custom of hanami was relegated to elite groups of nobles, samurai and poets who found themselves drinking sake and reciting haiku - typical poems of Japan - in honor of the cherry blossom. Only from 1600, from the Edo period, this celebration spread to the lower classes of the population and over the centuries became an important national holiday.
The Japanese usually celebrate hanami by going in city parks and organizing picnics under the cherry trees while feasting on traditional songs and dances. The word hanami really means “observe the flowers”, and in Japan the flower par excellence is the cherry one. Usually during the hanami, the meal is eaten in bento, the characteristic trays divided into compartments, and some of the typical dishes of the occasion are the sakura mochi, sweets made with bean paste and rice pressed and wrapped around a cherry leaf. Another characteristic dish of hanami is the hanami dango, a rice balls served with green tea made in the three colors that symbolize spring (pink, white and green). Linked to these meatballs is the famous proverb of the hana yori dango, by which the title of a famous manga derives. It means "meatballs rather than flowers" indicating that the materiality of things is often preferred rather than their beauty and harmony.
The celebrations ends late in the evening with the Yozakura (the night of the cherry trees) where the darkness is illuminated with the chochin, the famous paper lamps.
Although a festival dedicated to rebirth and a new beginning, it’s not a coincidence that in Japan spring marks the beginning of the new fiscal and school year, the hanami also contains a deeper meaning linked to the transience of life and the caducity of things. The cherry blossom is a beautiful show destinated to end very soon, just when it reaches its peak and, for this reason, the contemplation of hanami is accompanied by a subtle vein of sadness. As well as life and beauty, wonderful things but ephemeral and destined to fade. This is typical concept of Buddhism that highlights the awareness of the material inconsistency and the natural transience of things: everything changes, nothing is eternal.
The hanami takes place throughout Japan on different days, depending on the location, from the end of January to the beginning of May and every year thousands of Japanese move across the nation to go and admire the flowering in the most evocative places. For this reason, the Japanese Meteorological Agency releases the forecasts, updated weekly, of the cherry blossom and its peak moment (the mankai) every year based on a series of parameters that make the estimates very reliable.
Since few decades the hanami has been a festival that is also celebrated in the West for celebrating the arrival of spring and it is not difficult to find events in the main cities of our countries.
All News