A voyage in Japanese music, strictly connected to Animes but unknown in the rest of the world. 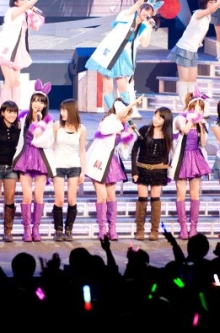 For years the Japanese anime industry as well as providing important turnover has become a real wheel around which revolve and draw many activities. You can think about merchandising, gadgets, museums (the most famous is undoubtedly the Studio Ghibli ones), or attractions such as amusement parks dedicated like the last one related to One Piece. But the music business is proceeding parallel more than other activities. Not only for its wonderful soundtrack created by great composers including Yoko Kanno, Koji Kondo or Shiro Sagisu, but for the Opening or Ending themes of the Anime series that help to sustain and increase the "idol" phenomena or an endless branch of bands which  gain fame thanks to them.
Taking a small step backward in Italy, the knowledge of J-Pop remained very limited. Censorship policies of seventies and eighties, who wanted italianize the product to make it more understandable, has provided an heavy contribution in stopping the influx of a genre rich of interesting ideas. It’s also true that some Italian artists have emerged, for example the Knights of King or Cristina D'Avena, which made small musical gems never forget, but the filter fitted to the outside has certainly contributed to dismantle an enrichment, through a more easily assimilated way, into a culture unknown to us and yet understimated.
From the technical side what immediately catches listening a J-pop song is some styles and arrangements very atypical compared to the national music history . As in Europe the cultural background in music is represented by the great composers of classical opera, Japan suffers from the strong push of the popular Noh Theatre, very close to acting and dancing. In this context, it also developed the style based on historical instruments like shamisen, taiko and the biwa.
Japanese contemporary music, therefore, is daughter of a westernization that led to the discovery of genres far removed from tradition as the popular American rock, ska, Latin American music and electronic.
The approach to these new styles is made by an assimilation typical of japanese: take the best and rework it . Of course talking about music the "best" can hardly be considered in an objective way but certainly they were able to master a huge range of influences with surprising skill. For this reason in any J-Pop song, from the easy to the most complicated ones, you may notice a care arrangements and stylistic choices that can give embarrassment to  many of our national productions and from which we could learn a lot ourselves.
Western music has also unfortunately provided to Japan the most commercial side of it which often enhances the image quality more than artistic skills . This has led to the phenomenon of "Idol" already mentioned above: girls (but sometimes also boys) teenagers who become real stars of the show by virtue of their physical charm. It is not uncommon that many of these stars as well as being short meteors become models or dubber in animated series. But it is even possible that some of these artists prove to be valuable, this also can be found in the rest of J-Pop bands and authors which comes from various backgrounds. For marketing reasons is difficult to see these artists outside of Japanese borders with the exception of China and Korea that also contribute to grown the number of celebrities with many natives.
Is now possible listen J-Pop without going too much against the language barrier due to numerous sites and blogs that allow you to find lyrics at least in English translation. It is also very promising the opening to the J-Pop which comes from the Japan Anime Live, a show focusing on music and Japanese anime which was attended by famous voice actors.
The path taken is the right one, we can only hope that the curiosity and our esthetic sense of music do the rest. You will surely find something valuable and I will introduce by HinaWorld pages some Japanese artists to listen and evaluate.
All News