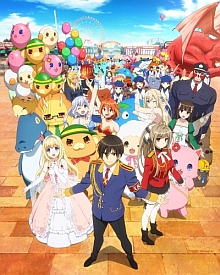 Four days remains to the usual appointment with the Lucca Comics, the Italian Comicon, and while waiting news from the conferences I'll be proposing an editorial on an anime series that was missing for few time. Shoji Gatoh is currently one of the authors at the top of my best author's chart and this time did not deluded expectations with his new original series. Best known for the Full Metal Panic series and the various spin-offs associated with it (like Fumoffu or Another) is always difficult for an author to repeat the success of such handsome. My curiosity was setted up to see what Gatoh had been able to accomplish having a publishing heritage a little “uncomfortable”.
Amagi Brilliant Park is born as a light novel and has been put to the screen by Kyoto Animation , already the author of the series of FMP Fumoffu and The Second Raid, sure a sign of the quality of the story since KyoAni hardly dealt with low artistic series. Personally I was not able to find the novels so after airing in early October I began to follow the series to enjoy it.
The story centers on Seiya Kanie, a rather self-centered guy who because of his being a narcissist is not surrounded by many friends although it is cool and smart. The narrative begins with a classmate named Isuzu Sento which suddenly asks him for an appointment while threatened him with a musket. Seiya is brought to visit an Amusement Park, the Amagi Brilliant Park, in total decay. Here among wacky characters and fantastic attractions of the park Seiya will be asked to help on an impossible mission: to be able to carry 250 thousand visitors within three months to prevent the final closure.
In this new work Shoji Gatou implement all the features of his style, using even self-citations of his famous characters. I do not doubt about the fact that the first element which encourage the vision of the series is the presence of Bonta-kun (here called Moffle), the main mascot of Full Metal Panic. A little advertising idea that lose his business side after the first appearance (on shouting out "Fumoffu!"). In this series Moffle is not a simple appearance, but a real character who will take part in the history.
The plot is located in a typical Gatoh's world, in situations where ordinary daylife is transformed by supernatural element which put everything in a different light and perspective, which attracts the reader and the viewer curious about what turn events may take.
The ingredients in the dish are all there, ready to have another hit series, perhaps not to the levels of the previous, but certainly enjoyable and exciting.
The only points that left me puzzled were the characterization , which is not too convinced, and the number of episodes. Seiya is in fact quite simple as stereotype but maybe his past, mentioned in the early episodes, it could be an element of surprises. Yet the fact that there is only one main character and not two, as in the FMP, maybe it can destabilize.
On the number of episodes I can only repeat what I said for other series: 13 episodes are enough to be able to create a complete and well-defined narrative arc that would cater to the audience? Personally I dont' think so, especially for the fact that this is an adaptation of a novel series that has reached now up to six volumes.
It's true that in recent years also Japan have begun to run anime dividing them into "seasons", the only way out to the problem of insufficient number of episodes. It will be the success of the series to decide its continuation.
All News