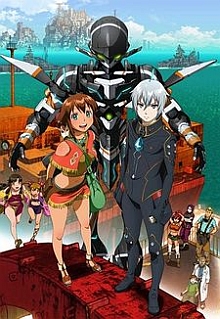 26 June 2013
Back after a few months of inactivity due mainly to the lack of interest shown in the new titles I put some words about the only new serie of this spring which I think was worth presenting. My feelings, as I fear since few years, is that after decades of flourishing and rich series that have become part of the history, Japanese creativity has fallen. Now the most valuable series are always Light Novel transpositions, the only real area that seems to not know crisis of productivity. Even the United States, who used to draw liberally from the japan screenplays, seem to have taken new life on their own streets and finding alternative solutions (see the upcoming movie Pacific Rim, a kind of Neon Genesis Evangelion made in the USA). I think it could also be a physiological decline in quality after several years of excellent series built, my only hope is that the level can rise again. I prefer to have serious plots with important and well-written story rather than an endless series rich of CG, effects and high video resolution that does not really leave anything.
In this case Sousei no Gargantia is part of that trend that recovers a bit of recombining old ideas together to get something good.
The story tells of Ledo, Lieutenant of Human Galactic Alliance, a front committed to fighting the alien creatures called Hideous. Humans have left Earth for many centuries and are now living in the colonies under constant attack of these enemy creatures. During one of these fights Ledo falls into a space-time distortion and wakes up after a few months on Earth. The planet is now completely covered by water and humans live on giant floating ships recovering from the sea everything they need. Here Ledo makes the acquaintance of Amy, a fifteen year old girl who works as a messenger and begin life among those who are the ancestors of his race discovering every day a quiet life and out of the daily battles in which he was forced to survive.
The first impression after watching few episodes is a series that draws heavily from Waterworld (the movie with Kevin Costner), Uninhabited Planet Survive, Shangri-la and Full Metal Panic. I could also mention some other work but it would be superfluous, certainly if you decide to look at her you can not help but notice elements of other works.
I believe that this represents its strength as the plot appears just a little easy but overall enjoyable, one of those series that will pay particular twists but at the same time will not disappoint too much. Perhaps the only flaw is given just by the number of episodes. 13 are very few to allow you to know the characters in full with all their nuances, but perhaps knowing the authors to create a mix of something old did not want to stretch to avoid the risk of tiring the audience.
However, if you want to enjoy a series in style "used insured" Gargantia this will certainly put together a rather heterogeneous group of fans.
All News