Papa no iukoto wo kikinasai!

From the eponymous novel arrives the TV series of Papa No Iukoto, a simple comedy that deals with important topic like adoption and orphans. 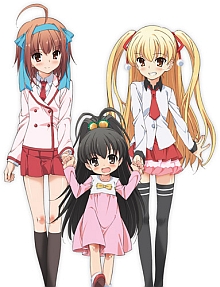 That the system for anime merchandise that bears the light novels and manga to TV series (or vice versa) was the preferred system for decades by the Japanese and has proven its efficiency it was already understood. Often journals or animation studios profusely catch from light novel market to create products that have already piqued the interest and response of the fans. A sort of "guaranteed used" for sales data, however, quite certain or predictable. One of the latest products that have followed this procedure is no Papa no iukoto wo kikinasai! (Listen to what Dad says!) from a couple of years known to the Japanese public. Published for the first time in September 2009 as a light novel series written by Tomohiro Matsu and illustrated by Yuka Nakajima has received good critical response so far that counts of nine novels still in progress. In 2011 was initiated simultaneously a manga serialization and announced an anime short series of 12 episodes broadcast on January ended yesterday.
Yuta Segawa is a normal college student who decided to live alone to attend the faculty of letters at Tama University. Orphaned and raised by her older sister because their parents died, decided to leave when he found that she decided to marry a man who had two daughters. About three years later Yuta is called home by his sister Yuri to move closer to family after the birth of Hina, the only blood related granddaughter of the boy. The reports seem to have recovered so Yuri ask Yuta to look after the girls for a few days to journey with her husband. During the trip the plane on which the couple was flying crashes leaving no survivors. Yuta decides to take care of three girls for not forcing them to separate from each other. His life takes a turn and he starts to take care of the girls, while studing and working.
The product that comes out is a nice play in the middle between school comedy and everyday life in which the characters live the vicissitudes and misunderstandings typical of boys and girls. Sense of humor and challenging issues such as adoption and the loss of parents are mixed in a story that takes and drags the reader without being too demanding or filled with particularly original elements. The interweaving of the Yuta's school friends and the love by the "major daughter" Sora makes the story very enjoyable and funny.
The manga is the better product if you prefer a style designed instead of literature . It follows the original novel because the screenplay was written by the same Tomohiro Matsu and this time the drawings are the work of Takemura Yohei. In here are fully reported the majority of the novel details and the pictures are very beautiful and detailed. Unfortunately it's still at a very initial stage because is currently being serialized in Shueisha's Jump Square and therefore only one volume was released last December with the second scheduled for April 4 in Japan.
Separate discussion concerns the television series which, although enjoyable and made with excellent quality standards, it loses meaning in a context of only 12 episodes. The events are barely able to get going and stops almost immediately with the same conclusion. It is still not known whether they will be provided for new series, 12 episodes for a story continued in 9 volumes gives more the idea of a promotional product for their serializations paper rather than a brand which intends to follow its own line. We will wait for future developments at the same time hoping to see the manga in few years, time to reach a publishable amount of takonbon. At least the manga that certainly deserves a reading.
All News