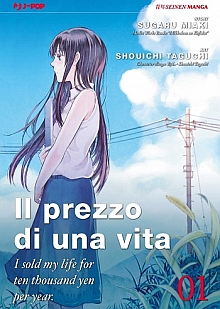 24 February 2020
The manga, or more generally all the comics, in Italy are used to be considered light readings to be addressed for leisure and to escape from reality. However, as with any other form of entertainment, they can be an important vehicle for conveying messages or asking questions to the reader, deliberately causing a sensation or highlighting controversial aspects of our modern society. For example some manga of the famous duo Oba-Obata like Death Note, linked to the theme of death, or Bakuman, a sort of self-declaration of the tiring life of the mangaka always swinging between overwork and public expectations. Three Days of Happiness is arranged on this type of provocative shonen, even if, for the subject matter, I consider the positioning of the Italian publisher J-Pop to be more coherent, considering it a seinen.
The original title was I Sold My Life for Ten Thousand Yen Per Year and this manga designed by Shoichi Taguchi is an adaptation of Sugaru Miaki's light novel same entitled Three days of happiness.
The story is about a young man in his twenties named Kusunoki who is dissatisfied with his existence. Having failed to realize any dream in life and having never found love, he spends his days between casual chores and his only passions: manga and music. One day, being short of money, he decides to go to some shop for selling CDs and manga to be able to buy something to eat. But shop owners let him know of a company that buys people's time, health or life. Kusunogi thus decides to go to this strange company and decides to sell his whole life keeping only three months in which to try to make some of his dreams come true. However his entire life is valued at the small sum of 300,000 yen (about $2700) and Kusunogi is flanked by a young girl named Miyagi whose task is to watch over him to avoid that, prey to possible attacks of madness, he decides to hurt other people. Miyagi can only be seen by Kusunoki and, after a period of initial dislike, the two begin to open up to each other and the young woman confides that she is forced to carry out the role of overseer due to a debt contracted with the company from his mother. As the days go by, the two will get closer and closer, leading them to make important choices for their lives and the time they have to spend together.
The manga is a so perfect adaptation of Taguchi of the light novel that he has publicly received the compliments from original author Miaki. The trait of the mangaka is very precise and essential almost more to remember the style of drawing linked to the transpositions of animated films rather than books. Also noteworthy is the evolution of the drawings which already after the first volume turn out to be much more detailed (in various initial scenes the characters find themselves talking in hasty white vignettes without backgrounds).
The characterization is somewhat simple and stereotyped but the true strength of the story is based on the chars evolution. As the characters open up and become aware, they increase the dynamism and rapidity of the events in a sort of continuous acceleration that leads the reader to the climax of the story.
The "supernatural" component is the real engine that sets events in motion and in this work you can find different levels of reading, a bit like in other titles such as Neon Genesis Evangelion. On a superficial level we find the classic love story born in a dramatic context, the two protagonists meet by chance and fall in love by choosing to spend the time they have to live together. But in Three Days of Happiness we get to ask much deeper existential questions whose answers, the author, whispers between the lines. Perhaps the ending appears a little hasty and, in the end, not particularly exhaustive, leaving some conclusions poetically to the imagination of the reader and which, in part, also demonstrates the further consistency of the Italian edition in not having used the international title taken directly from the manga.
If you want to enjoy a romantic story with a little more challenging themes than the mainstream The price of a life is a seinen that really deserves to be read.
All News