The adventures of a band of talented early musicians who try to move from the world of underground music to the tough world of music industry. 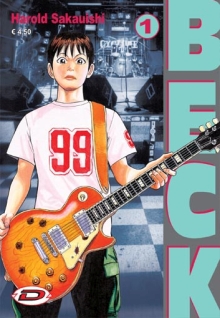 The last few weeks haven’t been easy, and we still find ourselves in the world pandemic emergency of the coronavirus which forces us to remain closed at home to avoid the spread of the infection especially towards the weakest people. Therefore, in an attempt to get something positive from this situation, in addition to taking advantage of the time available to do various things for which I never found a moment, I thought of check the library and picking up some old manga that deserved a rereading. So, the eyes fell on a series dedicated to the world of music that really impressed me: Beck (Mongolian Chop Squad) by Harold Sakuishi.
The main protagonist of the story is Yukio Tanaka, nicknamed Koyuki, a 14-year-old young man who is already quite tired of his boring and repetitive life. One day he meets on the street a strange dog with an eerie appearance and full of scars and saves him from the mistreatment of a group of boys. He discovers that the dog is called Beck and his owner is Ryusuke Minami, a sixteen-year-old guy who has just returned from America where he played with a grunge band called The Dying Breed. Ryosuke and Koyuki find themselves so united by the passion for music and become great friends. Koyuki begins to apply himself with dedication to learning to play the guitar and over time he founds "Beck" together with Ryusuke where Taira Yoshiyuki (bass), Chiba Tsunemi (vocals) and Yuji Sakurai (drums) joins to complete the team. The five boys turned out to be talented musicians capable of transmitting unique energy and thus attempting their climb to success in the music industry.
In the panorama of manga dedicated to music there are many famous titles such as K-ON, Nodame Cantabile, Detroit Metal City, just to name a few, but I have not found anyone who had the unique characteristics of Beck. Harold Sakuishi has indeed managed to intelligently mix many ingredients in a balance that continuously shifts between the musical elements and the stories of the characters, always keeping insight the true protagonist of history: the music.
Sakuishi's trait is quite simple compared to other mangaka but it has the advantage of being able to catapult the reader "inside the concert", literally making feel the “live feeling” as if you were inside the pages. Of great support are the continuous references, more or less hidden, that can be found within the situations and that recall famous musicians or songs. The author's passion for the Red Hot Chili Peppers (the Beck's style reminds them very much not to mention the obvious resemblance of the bassist Taira with Flea) is well known, but also the Eddie of Dyng Breed could bring to mind a certain Kurt Kobain duly cleaned up by the excesses of the real counterpart. Every band and every situation of pure fantasy contains elements that can bring to mind something real that starts to "play" in the head. For example, I personally find Beck myself to recall Rage Against The Machine a lot, but it all depends on the person's musical background. Each person can have a unique reading of Beck in his own way and I believe that few other titles can boast a similar attitude.
There is no lack of mainstream elements within the story that make it suitable also for readers less tied to the musical aspect. For example, the love story between Maho and Koyuki or the recurring vicissitudes of Ryosuke with Leon Skyes or the clashes of Beck with the producer Ran. And we also find several characters related to classic Japanese stereotypes such as Saito.
Maybe the only weak point in the story is the excessive length, the 34 volumes published from November 1999 until April 2008 could perhaps have been cut, especially in the last narrative arcs which begin to be a little too repetitive.
Beck turns out to be a fun reading between music, gags and slightly deeper situations that makes time pass pleasantly waiting for the world situation to resolve, with the best wish for all of you to be well and healthy.
All News