Angel Beats: battle in the afterlife

A new Anime created by Jun Maeda, the talentuos writer, based on a very original and interesting story. 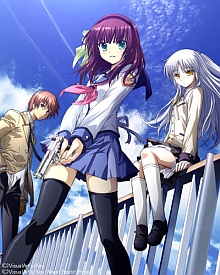 Shortly before summer holidays I find the time to write down two lines about an anime recently ended last month. Angel Beats certainly is been one of the most interesting series of the season thanks to a fresh ad innovative story different from the uncountable clones that often are produced. Due my translations for Neo-Tokyo Anime fansub I certainly had a vision more accurate and attentive towards the details and also, in these days, I'm finishing to review the latest episodes. Produced by Key-Aniplex duo (the first is an producer of visual novel and the second is a Studio which makes anime and music, owned by Sony), the same that produced masterpieces such as Kanon, Air and Kannagi, is a story based on the original subject of Jun Maeda, talented writer and author of numerous novels, scripts and lyrics.
The story takes place in a hypothetical afterlife world where the souls of people who have had an unhappy childhood or died young were taken. They awaken within a school structure where it is allowed to experience the lost years of their lives thus to find happiness and peace with themselves abandoning the regret of pain and suffering experienced in life. In this world you can not die, so even fatal injuries, despite causing severe pain, can heal completely.
The story is about Otonashi Yuzuru, a boy who wakes up in the school with amnesia. He know Yurippe (often abbreviated as Yuri), a girl with a strong personality and the leader of Shinda Sekai sensen or Battalion SSS which means “Battalion of the Afterlife World”. Otonashi joins to the Yuri group whose intent is to rebel against God and not accept the rules imposed there. This results in a daily battle against the one, called Angel, the President of the Student Council who try to force the dissidents to follow the rules of the world where they are.
The series is really nice with an good original subject. Each episode leads more and more into this strange world through the eyes of Otonashi where mysteries and unexplained situations continually keep the audience breathless. The only flaw of this series of 13 episodes is its lack of length. Despite a discrete final act, many of the characters and plot that could have certainly more complete and more interesting developments, ended speedy in the last episodes. A 14th episode will be published on the last DVD of serialization which is being released on December 22th but that hardly will contain further developments relating to the ending.
At the same time some marketing business were launched and have found a great response from fans. The soundtrack and especially the intro ad outro songs were edited by Jun Maeda himself with an high level production: among the artists contacted there’s the participation of singer Lia who had already sang in the previous anime series of the author. The same goes for Dead Girls Monster, the band that we see playing in some episodes, whose the two singles released Crow Song and Thousand Enemies have sold nearly 30,000 copies each in Japan alone.
Parallel to the anime series has begun production of a manga called Angel Beats Heaven's Door which tells the story happened before the arrival of Otonashi. In addition, the series was brought forward in November 2009 by a light novel that has ended its publication last May on Dengeki Magazine through which you can follow the progress of the series in much detailed view.
Then a last news before I leave for some vacation: from September I will start the Italian translations of the light novels Angel Zero Beats Tracks here on HinaWorld. See you then in September with many new features ready for you!
All News