After long years of waiting here is the cinematographic transposition strongly desired by James Cameron of the popular Yukito Kishiro manga of 1990. 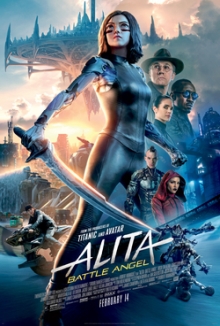 It was well known that the great Hollywood directors appreciated and watched with attention what was coming from the world of Japanese animation: but much more difficult is to achieve a colossal film. And very unhappy releases like Dragonball Evolution (or products "inspired" like Pacific Rim) certainly didn't help in the development of products with plots with great potential both artistic and appeal to the public.
Luckily, the interest of an extraordinary director like James Cameron, whose subject was pointed out to him by Guillermo del Toro, arrived not without delays and toils, to the transposition of Battle Angel Alita, a cult manga of the 90s.
The story of Alita takes place in the "Iron City", a metropolis under Salem, the fantastic city suspended between the clouds that throws the waste underneath itself. In this dump the scientist Ido Dyson (Ido Daisuke in the manga) finds an old cyborg badly damaged but with a brain still intact. He decides to put him back on his feet and give him the name of Alita in memory of his deceased daughter (in the manga is the name of his dead cat a few months earlier). From here the adventures of Alita goes on between the discovery of his past through his innate abilities, such as the martial art of the Panzer Kunst, clashes with criminals, the Motorball and the mysteries surrounding the city of Salem.
The greatest advantage of the film, absolutely not obvious in this kind of productions, is the good adherence with the original material that differs only in some details. Merit goes to the script James Cameron made with Laeta Kalogridis and to the director chosen by Cameron himself (who remained as producer, being involved with the Avatar films): Robert Rodriguez. Rodriguez was initially been involved by Cameron to summarize and combine the 186 pages of the script and the approximately 600 pages of notes and then, satisfied for the work done, entrusted him for the direction.
The prolonged wait over the years (the first idea of Cameroon dates back to 2000) has allowed the development of shooting technologies that have evolved thanks to the creation of Avatar and have been used to animate the characters of the film. A mix of "motion capture" (for body movements) and "performance capture" (for facial expressions) has allowed authors to merge reality with CGI reconstruction creating an incredibly likely effect.
The fight and action scenes, like the Motorball races, turn out very well and surprise the viewer for their realism however, this exceptional graphic segment is an added value that shifts the balance a little towards pure action, making history lose part of the most inner component: the love story between Alita and the young Yugo is too adolescent and the philosophical aspects and of moral themes that are deepened in the manga are almost entirely absent. The same applies to the development of Alita, which is shown only at the beginning of his story. It is no coincidence that the film covers roughly the first two volumes of the manga, anticipating only the part relating to the Motorball. The hope is that the film will enjoy one or more sequels that can at least partially fill the gaps left by this first feature.
But I don't think Cameron could have asked for more in his attempt to compromise between loyalty to the original work and the stringent budgetary needs of the ruthless world of Hollywood. The hope is that this could be a milestone and a compass for the films that they will be able to follow in the years to come, hoping to see a sequel that will soon bring us back to the world of Alita.
All News