The return of the legendary Ryo Saeba in the latest film adaptation of Sunrise, a nostalgic journey of one of the most popular series of the late 80s. 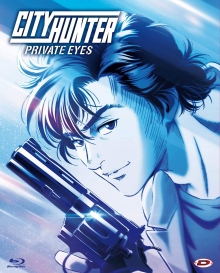 Apologizing for a guilty delay (more than a year after the movie was out her in Italy), but I could not miss the vision and reflection on the latest animated movie of one of the most iconic series of the late 80s arrived in Italy just a decade later the original broadcast: City Hunter. Anyone who had fun and excited among the nuances of the characters of Ryo Saeba, a cool sweeper as well as inveterate womanizer with the obsession of the mokkori, could not miss this movie that came out after the last TV special made in 1999.
Ryo and Kaori are hired by a medical student and model named Ai Shindo who has been pursued for some time by shady characters who intend to kidnap her. Everything seems to be connected to the death of the girl's father and to a mysterious and innovative weapons control system called Moebius. With the arrival of Shinji Mikuni, a multinational communications magnate and childhood friend of Kaori, our heroes will find themselves catapulted into the midst of conspiracies and gunfights across the streets of Shinjuku.
Before spending a few words on this new animated film it must be premised that this is a sort of "operation nostalgia" wanted by the authors to celebrate City Hunter and the universe created by Tsukasa Hojo who took care of the subject and the realization of the new characters drafts. It ranks as a sequel to the television series that takes place in a modern-day Tokyo, also recognizable by the locations that show many structures of actual Shinjuku such as the entrance to the JR metro station or the mega Lumine shopping center.
The plot is very simple and, if you like to tell so, repetitive. Nothing new is added to what has already been seen in the over one hundred episodes of the television series: there is not much to tell except that desire to find those characters who accompanied us at the turn of the 90s. And the main focus of the movie is just that: finding all the protagonists we have loved in the past seeing that, despite the years have passed, they are still the same. Kaori's hammering, Ryo's mokkori and shooting infallibility, his friendship with Umibozu, the curtains with Saeko... all elements that bring back to that warmth in human relationships that remains afloat despite the coldness of a world that it is modernized between mobile phones, drones, robots, apps and the XYZ whiteboard that has become virtual.
Very appreciable, in this catwalk of memories, is also the cameo of the Cat's Eye, the three thieves of "Cat's Eyes" who do their utmost to help Ryo and his companions after the damage to the homonymous bar run by Falcon and Miki. And the epic Get Wild could not be missing, a timeless masterpiece by TM Network and remastered for the occasion, which accompanies the closing postcard as in the TV series.
City Hunter Private Eyes is a perfectly successful amarcord operation with all the elements placed in the right place. You will not find an original remake or a modern re-launch of City Hunter, but a beautiful dip into the past and into everything this manga/anime has represented for an entire generation.