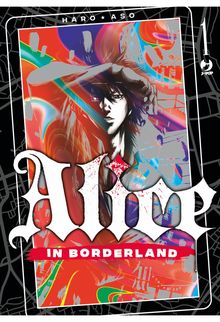 04 May 2022
In recent years, thanks to the sounding board of large world entertainment groups such as Netflix, many TV series defined as survival series have taken hold, where the protagonists find themselves involved in situations bordering on paradoxical and are forced to make extreme choices in order to survive. After the zombie and alien apocalypses of the last decade, another genre of "survival" has recently made its way, that linked to games in which the life of the participant is at stake: the Korean Squid Game is perhaps currently among the most known and derives from a Korean manga of the same name.
Alice in Borderland is instead a title that has risen to the fore thanks to the television adaptation made by Netflix, but it’s linked to a 2010s manga and the re-edition proposed by the italian editor JPOP starting from the month of March represents the right opportunity for presenting you this story.
Arisu, a former unemployed student and video game enthusiast, suddenly finds himself catapulted into the alternative Tokyo of a "borderland" identical in all respects to the real one, but deserted and dilapidated. In the company of two friends, the tough Karube and the erotomaniac Chota, Arisu will be forced to face a real survival game in that desolate scenario, in the form of a sequence of games potentially… deadly. Will the three boys be able to survive this new, dangerous world? Who created all this? But most importantly, is there a way for them to return to their original lives?
As soon as the story begins to come to life, it quickly becomes clear how Alice in Borderland - along with other titles - takes cues from the more famous School Rumble, of 2002, which made its way "school" (forgive the pun). The violence and explicit rawness present in the action scenes at the time led to a kind of censorship, especially outside of Japan and here in Italy, but twenty years later times have changed and this kind of story is part of a proven entertainment.
The narrative rhythm created by the author Haro Aso is really compelling and keeps the reader glued chapter after chapter without ever getting tired, a management of times and narrative arcs perfectly reported also in the Netflix series, if someone wants to approach the product also from the point of view of the "Live action".
Even the line of the drawing is very detailed both from the point of view of the characters and of the backdrops (now often made with the help of design software, see the latest works by Ken Akamatsu) and allows you to appreciate and immerse yourself fully in the scenes.
The aspect of the "game" is also very accurate with precise and consistent rules and an evolution of situations that leads the reader to identify with the protagonists in solving the puzzles.
The characterization of the protagonists is another strong point of the manga version which is deepened thanks to flashbacks and introspections which in the animated and television version were instead set aside at the expense of the action.
The only weakness perhaps found in the manga, but in reality, it is a common limit to this type of story, is the management of violence and rawness that often risks losing a fair balance and ends up being an excess instead of an element in service of the story.
The fame of Alice in Borderland has allowed, in addition to the animated and live transposition, also some spin-offs such as "Alice in Border Road" and "Daiya no King" and a sequel, with some characters from this series, started in 2020.
All News