I want to eat your pancreas

The cinematic debut of Shinichiro Ushijima based on the best seller of Yoru Sumino, the moving story of a teenage girl marked by the disease who decides to live her last days in a carefree mood with an introvert classmate. 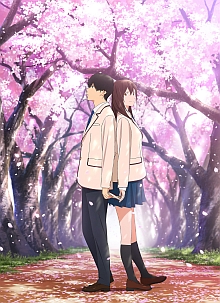 Thanks to the excellent results of the last few years, like the success of Your Name in the last winter, the DynIt and Nexo Digital collaboration continued with the aim of bringing some of the most important Japanese animation films to Italian cinemas through the initiative called " The Anime Season at the Cinema ".
After A Silent Voice, Mirai and Penguin Highway, the debut film by the director and screenwriter Shinichiro Ushijima, which has realized the adaptation of the award-winning novel of Japan Bestseller Award in 2016 by Yoru Sumino, has arrived in cinemas.
Haruki Shiga is a shy high school student and her character could not be more opposite than that of Sakura Yamauchi, a classmate who is apparently always cheerful and full of life. One day the boy accidentally finds in a hospital the secret diary of Sakura that she had lost and reading him discovers a terrible truth: the girl has a terminal illness in the pancreas that will lead her to death in a short time. Becoming the only keeper of his secret, along with his parents, Sakura decides to attend the boy with whom he knows he can talk freely about his condition. Despite the great difference between the closed and introverted character of Haruki and the energy and vitality of Sakura, a deep friendship is born between them, which will bring them closer and closer.
This movie is the last in recent years which deals about delicate issues in the complex contemporary society. The fear of death, the difficulty in relating to others (which sometimes results in the dramatic phenomenon of hikikomori), the shame of an illness or a precarious state of health are main elements of the plot in which the implicit denunciation of author cannot be only limited to Japanese society.
The beauty of this film lies in the way in which the director manages to cross such important topics with the normal everyday life. Sakura decides to face her destiny with a smile and chooses to live her life to the maximum as long as possible. Both in trying to satisfy some desires but above all in living one's daily life appreciating all that surrounds it. And in the awareness of how important every lived moment is, she tries in every way to shake Haruki, whose existence passes passively without being involved in what surrounds him.
The characterization of the characters, despite some stereotypes, is well defined and you can understand the evolution of their relationship without the need for scenes or situations too explicit, being very engaging for the viewer.
There is also to praise the work done by the Studio VOLN, a young animation studio created by a former MadHouse producer who made the feature-length film in a technically impeccable way. Not only in the char design but in the backdrops and in the locations, really very realistic, where the CG was well used. In fact in a film where feelings play a fundamental role, the sweet strokes of hand-made designs, without resorting to too many technical devices, is extremely important.
Some choices were not convincing and I suspect they are mainly due to the inexperience of the director (who is also the writer) that you can forgive.
On the one hand the title itself I want to eat your pancreas is not very appealing outside of Japan. Japanese sometimes use overly explicit and less fictional titles, but for a film that wants to have international visibility, at least a more understandable subtitle would have been appreciated. I can only imagine the looks of people who have heard themselves pronounced in front of this title and have immediately thought of a splatter movie full of cannibals!
Actually, without making particular advances, the meaning of the title is explained in the first minutes of the movie and concerns a popular belief of the ancients: if a person was sick to a specific organ of the body it was thought that feeding on that organ (obviously of animal source) the disease could be cured.
The most disappointing part, in my opinion, was the ending where, with respect to the rest of the film, always very concrete and realistic, it has to many clichés (the dream moment after reading the diary, the last sentence of Haruki before the credits), saving the situation a little with a nice post-credit closing scene.
However nothing so serious to invalidate the vision.
In conclusion, I want to eat your pancreas is a good movie, maybe not perfect but light and enjoyable both by those who want to see a good story and who prefers touching and moving themes.
All News