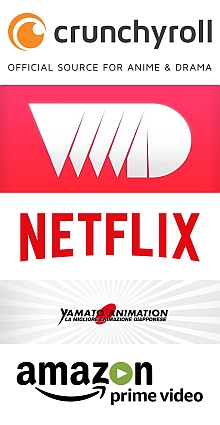 20 April 2018
"Once upon a time there was the fansub"... that would be the starting lines of this article but fortunately that statement is not entirely true. There are still many groups of fansub who continue the mission to bring the new series to the fans (Neo-Tokyo Anime, the Italian group I founded and rather active in the 00’s, is still alive), but something has changed since few years.
The Japanese Animation Studios have realized how valuable was the export of their products on the international markets and how the disposement of contents through the fansub (we are not here for discussing its legitimacy) was important as a promotional vehicle. Years ago the only system was the DVD (and earlier the VHS) from Hong Kong with English subtitles, sometimes with wrong translations, which allowed the viewing of series never dubbed.
But over the years internet have gradually replaced physical media thanks to Torrent, the IRC Bots, Emule and other file sharing software.
The real change of philosophy comes in recent years with Crunchyroll, an online portal founded in 2006 by a group of UC Berkeley students in which simultaneously with Japan (hence the term Simulcast) the Anime were published online with official translations in English provided by the same animation studios.
The presence of advertising banners or paid subscriptions provides the income necessary to pay the licenses and in this way it is possible to watch, even free, the contents in a completely legal way.
After Crunchyroll other sites have started to provide streaming of Anime covering for a fair amount of titles (Hulu, Funimation, Daisuki) despite again several series are available only through the fansub.
The industry has thus begun to adapt to market demands, even coming to giants such as Netflix who have directly commissioned the animation studios of the original series or remakes (Saint Seiya is expected in 2019) that will provide an already dubbed SimulCast. And it is announcement of the last days that Crunchyroll will propose the new series of Full Metal Panic: Invisible Victory already in dubbed version in English in few weeks after online subtitling.
The question is easy: what we have gained from simulcast?
The possibility of being able to see the subtitled series, at any time and on a wide amount of devices, is certainly a primary point on today's world in which the speed of fruition is itself a required quality. The "official" translations coming from the animation studios also allow a level of adaptation and translation much more correct respect the "free" interpretations of the fansub that, at least in the Italian localization, has always been based on a double passage from English or from few peaople able to translate directly from Japanese.
However the pathos, the more crafted style that distinguishes the fansub groups each with its standards, the styles of translation and the artistic value given by the fans, is missing. All without bringing up the age-old issue of the rules of fansub for which the publication should be suspended in case of fired series (because a SimulCast is a license regularly purchased).
Fansub groups exist and will still exist even if they may struggle more and more to keep up with the latest releases: it will be our choice if we will use more rapid and aseptic official channels or wait a few more days to see a product, perhaps imperfect in contents, but with the passion that the amateur translations have transmitted to us from many years.
All News