The new OAD of Negima series comes after the poor Ala Alba trilogy, it will be better? 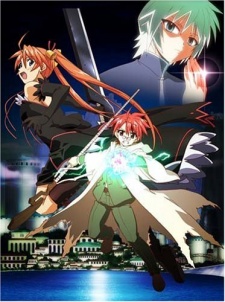 After an ugly first anime serie ended with the staff displacement, a spin off (Negima!?) and two OVA quite unnecessary, the serialization of Negima anime is going through a second spring (if not a first) in last two series of OVA, or better OAD. This acronym that stands for Original Anime DVD means that a series is released on DVD bundled with the manga takonbon.
The experiment has been so successful with the first publication of the three Ala Alba’s episodes which Kodansha decided to produce these 4 new ones. Every three months starting from September (with the number 27) has been and will therefore be possible to find a double edition of the original Japanese tankobon containing the new OAV dvds.
The story reprises from where ended in Ala Alba. We are in manga chapter 183, Negi finally landed in Wales after the hard training dealt with the other girls under the leadership of Evangeline. Through the door that leads to the Magic World he find an unexpected danger. Fate Averruncus, the mysterious boy belonging to the group of Kanto Magicians dissidents who had already faced during the school trip, meets Negi again in the land of magic. The technical realization of these episodes is well made, having left almost theatrical aspects of the series of Ala Alba it goes on with many fights and breathtaking scenery. Certainly much of the success goes to the choice to publish the continuation of the series in OAV format, that allows the use of a small budget but at the same time more focus on quality. And we can’t forget its promotion through the bundle with the manga, which enabled an high income due to having put together the anime public and manga fans (a manga series reader will not lose the opportunity to bring home takonbon and DVDs in a single blow).
I just regret the missed opportunities to exploit Negima making a series of long duration as Naruto or One Piece, it would have all the requirements. My only critics is that in the actual way Negima is too fragmented. Anyone has not read the manga can not succeed in any way to link the series between, leaving a lot of void impossible to fill.
The next episode is scheduled for release May 17 along with the number 30 of the manga while the final chapter will be out August 20 with number 31. The break between the second and the third is due to the fact that in March there will be a Drama CD boundled with the 28th takonbon. After the sell of 70,000 copies (only in Japan) of the first dvd, Kodansha has announced that will be produced a final movie in 2011 for give an end to this saga of Negima, yet any future plans are still unknown.
All News