The End of Evangelion 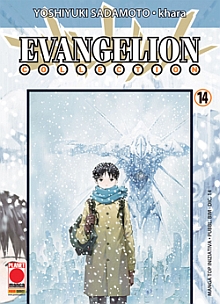 With a bit of melancholy I'm going to write some reflections on a manga that has accompanied me more than a decade of my life. That feeling in part disappears soon remembering the heavy editorial vicissitude of this title which was published in Japan in 1994 and ended in 2013 (on the magazine) with only 14 total takobon. Neon Genesis Evangelion, in any version from movies and TV series to Rebuild, always make flames and topics by the hordes of fans who was dragged in during these decades. The crucial point remains the same: its final and the possible keys of interpretation that implies. And now, without naming Hideaki Anno, I will focus on the manga version of Yoshiyuki Sadamoto that November 20, in the sametime all over the world, has finally come to an end.
To do a quick recap the manga began its serialization about 8 months before the animated serie to give a sort of promotional launch. Soon after the release of the first takobon, usually published yearly, the manga took a completely different direction from the anime. Sadamoto's choice was to represent a sort of his point of view of the plot. Thanks to this, plus several additional scenes and the modification of certain events of history (for example, in the manga Toji loses his life rather than being mutilated like the anime), Sadamoto presented a plot much more plausible and without some excesses of the television version. The characterization of the main actor is the most obvious difference for those who has been an avid viewer of the series: Shinji less inert and more careful about his feelings, a Rei less cold and tactless and Asuka perhaps less moody by their corresponding animated.Where Anno had brought exasperation in certain ways of being of his characters to follow his eccentric vision of the work, Sadamoto reported all on more conventional canons. And so the manga plot acquires an huge advantage.
Then comes the final chosen by the char designer, very nice but for myself below my personal expectations. From now on be aware for spoilers! You are strongly recommended to continue after have read the last volume of the manga (which is why I will avoid underlining or italics the next paragraph)!
It was clear in the thirteenth volume that the ending would fall on the final “End of Evangelion” ones, where humanity was extinguished thanks to the Third Impact and collection under one big soul in which they would not feel pain and suffering. Even in the manga, Shinji, who has transcended the powers of a God, decides in the end to stop the process of unification of souls (the Human Instrumentality Project) but unlike the film we have a World Reset. Shinji and Asuka not become the new Adam and Eve of a humanity that has been re-settled twice after the Great Flood, but a restoration of the previous world where all souls that "have enought willing" will return to Earth, a new Earth gones back as before the Second Impact.
An happy ending that could be expected from Sadamoto which is more distant from dark and destructive side like Anno, but so mundane that reminded me some recent anime series like Angel Beats or Mai-Hime. Personally I think that the differences and the potential that had emerged during the years of publication would had sent to less mainstream conclusion, though still beautiful and valuable. Same applies to the additional chapter, in which we meet a young Yui colleague which reveals to be Mari Makinami. So an extra surely out of place and dedicated primarily to advertise the Rebuild of Evangelion, a commercial appendix that I would have gladly avoided.
This is Neon Genesis Evangelion, take it or leave it. A story which will cause controversy in all its aspects, but that continue to thrill, intrigue and entertain for many years to come.
All News