Nadia and The Secret of Blue Water

The first masterpiece of Hideaki Anno, between legends and literature best seller. 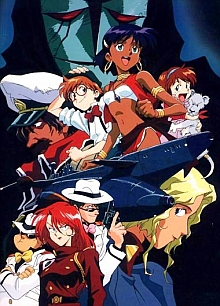 Between a vision and the other new material or old series that have never been able to see, sometimes I find the time to catch up from my video library old DVD of my favorite animes that often are the rediscovery of real jewels. The Secret of Blue Water, which is certainly a masterpieace, remains at distance of years (in this case my last vision dates back to 2003-2004) a top serie. The story opens with Jean, a young budding inventor, who decides to go to Paris Expo of 1889 to join the fly-race. Here he meets Nadia, a dark-skinned orphan girl, who works in a circus lion in the company of the King. Nadia is chased by a trio of adventurers ( Grandis, Sanson and Hanson ) who want to take over the blue stone around his neck and that mysteriously lights up when the girl is in danger. Start here a long adventure in 39 episodes that will bring Nadia to discover the secret of blue stone and the place where she was born in a merciless battle against the mysterious Gargoyle and Neo-Atlanteans.
We must immediately clarify that The Secret of Blue Water is a nineties series and was one of the first to bring in the animation scripts very deep subjects such life and death, the power of science, wars and human tragedies.
The production was under the director Hideaki Anno, well known for his later masterpiece Neon Genesis Evangelion. In fact the team that gathered here is the same which thanks to Nadia will lay the foundation for the Evangelion success: the chara design by Yoshiyuki Sadamoto and the unmistakable bakcground musics full of pathos and mystery by Shiro Sagisu.
Few people know that the original script was a draft made by the master Hayao Miyazaki that he used to create Future Boy Conan and the movie Laputa - Castle in the Sky. It was the broadcaster NHK which commit a work that regained the original story by adding some elements from the novels of Jules Verne like 20.000 Leagues Under the Sea and decided to entrust it in the hands of Hideaki Anno who was rising to the public thanks to his first work Aim for the Top! Gunbuster.
The series follows the typical Anno narrative style capable of mixing in the history many elements with challenging issues like religious elements, science fiction and very deep characterizations. It results in a story that has several interpretations: the adventure of two young lovers, the importance and value of friendship or political, moral and spiritual conflicts.
A drastic loss of quality in the series takes place between episodes 23-34 , known by fans as "islands chapter", when Anno was forced to leave the direction of the episodes to his friend Shinji Higuchi. The initial success had led NHK to ask more episodes than previously agreed and soon the director found himself having to create new scripts in the face of a shrinking budget . The series came to a standstill for about a month and then return in broadcast slowly. Hence the decision of Anno to entrust the central chapter to Higuchi and devote himself to write the final 5 episodes .
Unfortunately these episodes denote the absence of the Anno's style, resulting in some parts trivial and superficial compared to the rest of the series, plus highlighting the budget problems that reduce the quality of the animations.
In Italy the series was taken very early, in July 1991 (only three months after the broadcast of the last episode in Japan), but censored and amended as was usual at that time. Only later , in 2003, the Yamato Video has proposed a new edition redubbed (in which was involved part of the voice actors of the first version), and includes also the episode 34 never aired in Italy.
I watch with pleasure this little masterpiece of animation really able to excite again the viewers more than twenty years after its publication.
All News