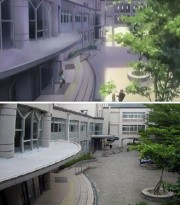 03 May 2010
The Japanese, we know, have always been quite original in terms of extravagance and hobbies and once again they did not disappoint expectations. In the last years the new otaku’s passion called location hunting, the searching and touring of real places that has been used to create scenarios for the animated series, from a possible engine for the local economy is turned into a boomerang which have unforeseen consequences. The increase in the number of visitors can evolve under certain circumstances into public order problems. One of the cases on which the popularity brought benefit is certainly the Washinomiya Shintoist temple, located near Tokyo. Being the setting of Lucky?Star anime it had quintuple the annual flow of pilgrims since 2007, the debut year of the animated series.
But for other locations, things had gone in different ways. The most famous is certainly the Nishinomiya Kita High School located in Hyogo Prefecture. This institute was taken as a model for Kenritsu Kita High School from The Melancholy of Haruhi Suzumiya, the cult series which had the most success in Japan in recent years. This has caused an uncontrolled overflow of people at every time of day that sneak in the school taking pictures and bringing trouble and embarrassment to teachers and students than among other discomforts are being captured in pictures uploaded all over the internet with a clear violation of their privacy.
For this reason the school management have decided to put an advice, also on the official homepage of the institute, on which it’s reported that access to the school buildings without prior permission is considered crime and the school staff will immediately contact the police in case of trespassing. However, it remains possible take picture from the outside.
More drastic measures were taken to Hakone, Kanagawa Prefecture, which fans of Evangelion remember being the place where is situated the city of Neo Tokyo-3, the bulwark to defend humanity against Angels. Because of the imponent promotional campaign ordered by Gainax for the release in 26th May of the second animated movie Evangelion 2:22 You Can (Not) Advance, the supermarket chain Lawson (the second of Japan) converted one of its stores and made it a rather unusual shop. Renamed Lawson Tokyo-3 Evangelion Convenience Store has been fitted with a wide range of products, ranging from foods to gadget, all based on characters from Neon Genesis Evangelion. After the official opening which took place on April 23 the small town has been invaded and shop taken by fans. This has completely congested roads and the possibility of finding parking over across the area and around Hakone. Some advice were placed on the official website of Evangelion but they turn into ineffective. So the citizens have protested in the city obtaining the closure of the store. Two days after opening the shop was dismantled and moved back to a normal mini-market. These new phenomena highlight the infinite economic and trade possibilities arising from Japanese animation, which slowly are also moving abroad. It’s no longer difficult to get gadgets and products inspired animated series anywhere. But the location hunting is definitely a way to be evaluated carefully, if poorly designed its consequences may lead to more harm than profit. There’s no doubt that for a fan to go in one of those places is like to be on the line between reality and fantasy, a very singular feeling.
All News