On the 50th anniversary of the man's landing on the moon, the analysis of one of the most beautiful science fiction series in recent years: the adventures of Shima on the Stellvia space station. 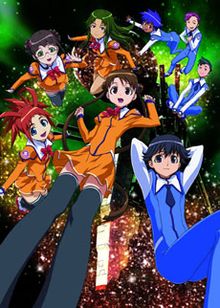 50 years ago astronaut Neil Armstrong was putting first human step on the Moon, exclaiming the famous phrase "a small step for a man but a big step for humanity". So why not also celebrate this historic anniversary on HinaWorld by talking about an anime series set in space? The Japanese production has really brought us an infinity of stories related to space: even if I ignore the large number of titles related to robots, I can think to Uchuu Kyoudai, Twin Spica, Planetes, Sora wo Kakeru Shoujo and I could go ahead with numerous other titles. But wanting to get closer to the mixture of feelings, from the mystery to the sense of belonging of all humanity, which the landing on the Moon manages to evoke, I want to talk about Uchuu no Stellvia (also known as Stellvia of the Universe), a science fiction series of the 2003 unfortunately never arrived in Italy.
It is the year 2356. 189 years have passed since an electromagnetic wave caused by the explosion of a Supernova damaged the earth by extinguishing 90% of its inhabitants. Almost two centuries later humanity has reconstructed what had been destroyed and space stations have been created to defend the earth.
In fact, a new threat is looming on the horizon: the arrival of a second electromagnetic wave that threatens all human beings again.
Shima Katase is a young student who goes to the Stellvia space station astronautics academy to fly into the universe and see the sky as her ancestors saw it. Soon she will face the difficulties that training imposes, while the threat of the second wave is on the horizon.
Uchuu no Stellvia is an anime serie that encompasses various genres and is suitable for a wide audience. In fact, among the elements of history we find a mecha component with space stations, Bianca spacecraft and Infinity robots. Adventure and mystery accompany Shima and his companions, always linked to a classic narration of school life set in the space, however, between youthful love, bonds of friendship and conflict. The plot follows the events with a balanced swing of light-heartedness and drama that make the episodes always intriguing and exciting.
Created by Studio Xebec, the chara design was entrusted to Uno Makoto, already author of the anime version of Love Hina and here engaged in creating original characters and no longer a transposition of a manga, which stands out for its clean lines but in the at the same time well detailed.
The soundtrack of Stellvia has become quite famous, especially in the opening and closing acronyms (Asu and no Brilliant Road, Kirei na Yozora and The End Of The World) with the jpop band Angela, so much so that some years later it was foreshadowed one of the new singles entitled "Fly me to the Sky" was the official opening of Uchuu no Stellvia 2. In reality, unfortunately, a second season had entered the pre-production phase in 2005 before being stopped due to "internal reasons" as reported by the director Tetsuo Sato who had already taken care of the first season making it, definitely, a finished series.
In the last lines I want to conclude this article with a thought dedicated to the Kyoto Animation in whose disaster, caused by a madman, 36 staff employees lost their lives. The artistic value and, even more importantly, the human one that have been lost are invaluable. I hope that KyoAni can soon recover and continue to turn out masterpieces like it has always done over the years.