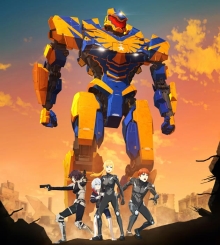 23 March 2021
In recent years, the production of animation series in Japan has continued with the usual consistency, except for the slowdowns due to dramatic events such as the pandemic or the incident at Kyoto Animation, but the worldwide distribution, intented as dubbing and localizing for a specific country (in my case Italy) has suffered a decline. The simulcast phenomenon, proposed by platforms like Crunycroll, has meant that many series arrive almost simultaneously in subtitled versions, slowly replacing the fansub phenomenon, but delaying the arrival of full localizations in the waiting of the simulcast listening data to determine what to license.
Therefore, we have to appreciate the work done by Netflix which, despite the criticism about some editorial choises, has the merit to have allowed the distribution of more new material.
But Netflix did not stop here and, since few years, had realized hybrid productions between America and Japan that have been added to the standard acquisitions of anime series. The example of the remake of the historic series of Saint Seiya - The Knights of the Zodiac was certainly among the best known titles, but a few weeks ago Netflix presented the sequel, in the animated version, of a Hollywood brand that had been missing in action for a while: Pacific Rim.
The story of Pacific Rim - The Black follows the events of the 2018 film titled The Uprising. After that clashes, the battle against the Precursors is far from over and the scene moves to Australia where, in the middle of the desert, small breaches begin to open and release Kaiju of all kinds. It was thus decided to seal off the entire continent by evacuating the population to limit the damage and be able to prepare the response to future attacks. The protagonists of the story are Taylor, a young Jaeger pilot cadet, and his little sister Hayley. The bus on which they travel to the evacuation point is attacked by a Kaiju and the two boys along with the other passengers are saved by the intervention of a Jaeger piloted by their parents. Brought to safety in a disused base in the middle of the desert, the parents leave for help towards the coast aboard the broken Jaeger, but they will never return. Five years later, Hayley accidentally discovers a Jaeger model for training inside the base, but its activation calls in a Kaiju which destroy the refugee camp. The two boys are forced to flee aboard the Jaeger to attempt a desperate search for their parents through a post-apocalyptic Australia dominated by Kaiju and gangs of survivors.
Those who have already had the opportunity to follow the previous film episodes of Pacific Rim know well what was at the basis of the idea of Guillermo Del Toro in his attempt to pay homage to the historical Japanese mecha, with very evident references to Evangelion and similar, so I will not stay here to dwell on elements that are obvious to any spectator. What makes this anime a bit special is the combination that has been created between the American and Japanese styles which, after imperfect tests such as the mentioned Saint Seiya Netflix, is perhaps starting to bear the hoped-for results.
The series is in fact produced by Legendary Television, an American production studio that has already dealt with movies and cinematic colossals, but with the direction of the Japanese Hiroyuki Hayashi (Battle Programmer Shirase, Re: Creators) and Jae Hong Kim (Final Fantasy, WallE, Finding Nemo, The Incredibles).
This has an evident impact in the character design (see the physiognomy of the character of Mei) and in the mecha design, typically of the Japanese school, while the choices of direction, the script and the dialogues are strictly in American way. The development of the scenes through the CGI brings back to more American productions, in which the component of the design is less predominant than the CG, making the dynamism of the scenes much less fluid despite an excellent level of detail which denotes a deep attention.
Which has benefited most from the American part is certainly the characterization of the characters, very accurate and elaborated also through the script that takes all the time necessary to deepen the stories of the various protagonists, much more complex than the simplicity that we were used by the movie colossals of the brand.
This first season of 7 episodes presents itself as an excellent appetizer that creates expectation on its sequel: the development of the story and the characters, the mysteries and the cliffhangers but also the many questions that have remained open after the movies and that can only be answered in this one, since a Pacifi Rim 3 is currently not in develop. The real limit of this series unfortunately is given by the small number of episodes proposed in the face of an already announced second season in progress (and it is not clear why not to create a minimum of 12-13 episodes) which will not arrive before a year, with the consequent collapse of the hype due to these publications "in fits and starts", but also for the great uncertainty of continuation that these Netflix productions carry with them, still perhaps too much in the "experimental" phase to be able to have a definite public that guarantee a future at least in the medium term.
In conclusion, I would like to suggest the vision of Pacific Rim, although not strictly necessary, to those who have seen the films, have enjoyed them, and are interested in learning more about this hybrid sequel. If you are looking for a series about Japanese mecha, forget it, there is a lot of other series that can better reflect a more classic taste.
All News