After the worldwide success of Naruto, Masashi Kishimoto returns and, with the drawings of Akira Okubo, presents a story of samurai in which tradition and science fiction mix together following his typical style. 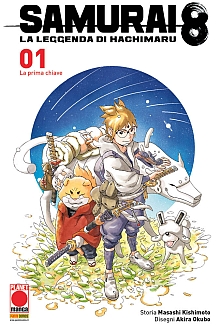 Every year Italian Festival of Lucca Comics give us great news (of which I will talk little by little during 2020) and I could not miss the opportunity to get the new Masashi Kishimoto manga which comes 5 years after the conclusion of Naruto and a well-deserved rest period. But just because of health problems occurred during the serialization of Naruto, Kishimoto decided to deal only with the script and the preliminary sketches of the characters, leaving the task of drawing to his historic collaborator Akira Okubo who was also involved in the chara design of the film dedicated to Boruto.
Hachimaru is a very weak and sick young man who survives only thanks to a life support to which he is connected. This machine does not allow him to leave the house and the boy is forced to spend his days locked up while he dreams about becoming a Samurai, a series of noble fighters who protect and defend the universe from those who threaten its peace. One day his father Furuta leaves home to get a component that should allow him to make a mobile life support for his son. Left alone at home with his robotic dog Hayataro, Hachimaru meets a cat-like android who introduces himself as Daruma, a true samurai travelling on a voyage to find all seven Keys to open Pandora's Box, a divine artifact that it can avert the end of the galaxy's life that is coming to an end. The samurai gain their power from special objects created by the warrior god, Acala, and Hachimaru's father hid one of these artifacts in his son. Following the initial events of the story Hachimaru activates the power of the artifact inside him and becomes a samurai ready to be trained by Daruma.
The setting of the story perfectly sums up the typical style of Kishimoto among warrior clans, struggles for power and intrigue, in a context that reflects the epic character of the Japanese Middle Ages. Everything, however, is placed in the future, in a sci-fi location that combines the elements of tradition and modernity in an innovative blend (and which at times reminds us of what Ken Akamatsu did in the last part of Mahou Sensei Negima and in his suite UQ Holder).
Okubo's design is very respectful of Kishimoto's trait and you inevitably notice, already from the first chapters, several references to the previous work. Hashimaru himself appears to be physically a sort of cross between Kabuto and Konohamaru.
The story is perceived to be very ambitious and for this reason it seems to have a rather slow start, unlike most of the mainstream shonen manga focused on fighting. Naruto, although in a good plot complexity, was rather linear as a story. The impression is that this Samurai 8 wants to have more depth and complexity (like One Piece, for example) and therefore needs more time to take off. Kishimoto said he had in mind a story that should be distributed around 15 volumes, but I am sure that in the end there will be many more given the potential behind these first chapters.
If you enjoyed Naruto or love the fighting shonen I suggest you give it a try with this new Samurai 8: you will find many of the elements that have made Kishimoto famous and at the same time many interesting new features, provided you have only a little patience at the beginning while the story begins to mesh.
All News