For the Kawashita's fans a new stories of only three takobon but more "spicy" than the past! 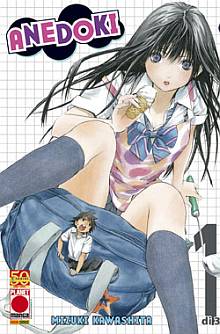 Finally here in Italy comes out a new manga of one of my favorite authors, Mizuki Kawashita, which I did not hesitate to buy and read all in one breath. Known in the world for the wonderful school comedy Ichigo 100% (Strawberry 100%) and for the following Hatsukoi Limited, this time she presents a work more daring than others.
The story tells about Kota Ochiai, a thirteen-year student, that one day meets by chance in Natsuki Hagiwara four years older. Tired and flushed the girl eat Kota ice cream causing the embarrassment and escape of the boy. Just got back home Kota discovers that his father was transferred to work temporarily in Hokkaido and shortly reappears Natsuki, who has come to return his school card which had lost. She decided to move in his home as a maid for Kota, returning the favor of ice cream. So it starts a troubled partnership between the two. In the midst of bickering love with the beautiful Kanade, his classmate, and Natsuki, Kota will try to figure out if what she feels it is a great friendship or something more.
Ideal for lovers of the work of Kawashita , Anedoki is an interesting manga but with some formal defects which were probably due to its early end. In fact, in Japan ended the twenty-sixth chapter, after only six months of publication, given the lack of interest occurred (on which the magazine like Shonen Jump don’t make any discounts). For who knows the author is immediately evident the presence of hot scenes pretty much pushed to the ecchi genre. An abundant use of panties and breasts waving usually only mentioned in previous works, in short, a rather excessive fanservice than the style in which we had become accustomed.
The characters travel on the classic stereotypes and even here you can see different plates with the author. Natsuki is much like an audacious Tojo and Kota remembers quite well the child version of Manaka. Their characterization is quite simple and already in the first volume we are able to frame them quite easily with just the mystery of the origins of the girl to keep up interest.
The plot is unfortunately very predictable and with plausible situations , the author clearly make an attempt to change from the usual comedy school situation. The purpose is acceptable but not managed too well. Natsuki sling in the house of Kota with the willingness of the father suddenly disappears on business and talking on the phone for a few minutes with the same child, is quite paradoxical. It is a classic element in other types of series where the person is an alien, but in a context of ordinary life the bias is obvious.
The only things that never betray the mangaka fans are a beautiful stroke and the situations funny and exciting. You can’t read Anedoki without letting go a laugh for a series of absurd and ironic events.
In conclusion I think that fans of this great author can easily buy the manga. Those who read her for the first time will make better to obtain one of the other works before this, certainly more interesting and balanced. We hope that this little flop after 14 years of honorable service will be a shake for the author to find a new artistic vein in which to improve and come back soon to its former glory.
All News