A tribute to the original manga series of the Knights of the Zodiac, made by two great fans of the saga under the supervision of the master Kurumada. 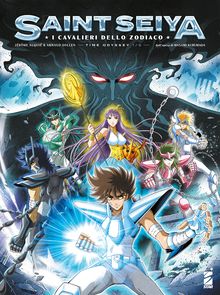 Every year in this period it is a must to take a look at the novelties proposed in Lucca Comics, the most important italian Comicon. My interest is gone to presentation of a new work from the world of Saint Seiya - The Knights of the Zodiac - which have very different elements from a classic operation of remake, sequel, prequel or reboot.
I'm talking about the new Saint Seiya: Time Odyssey created by two French authors (yes, you read that right: French) Arnaud Dollen at the screenplay and Jérôme Alquié at the drawing, the latter already known for the splendid work carried out on the illustrated remake of Captain Harlock, Memories of Arcadia. The work of the two artists was born from the great passion for orignal Kurumada's work, born at the time of the airing of the anime on European broadcasters at the end of the 80s, which led them to negotiate the rights with Bandai for the realization of a work dedicated to being complementary with the narrative of the manga.
The story is linked to the main events narrated in Kurumada's manga, filling the "gray areas" of the narrative with subplots that develop situations and events of the main storyline.
This new way of linking to such an important series is really interesting and was developed by the two authors in continuity and consistency with the original work by true fans.
Furthermore, the contribution of Masami Kurumada himself should not be underestimated, because he approved every single choice of the authors, often also putting forward ideas to develop their imagery.
What emerges from the reading is the enormous attention to detail, from the armors (which version, for commercial agreements, is the manga one) to the design of the characters, perhaps in a more "western" trait of Alquiè's pen, but very close to the originals made by Kurumada.
The volumes are made entirely in color, with pattern templates very close to the anime series, in the successful attempt to recall its memory.
The first issue is dedicated to Ikki (Phoenix) as each of the five volumes will be addressed to one of the five bronze saints, with the last and conclusive about Seiya (Pegasus).
At the plot level, it is really interesting how the authors managed to fit between the narrative jumps of the story in perfect continuity with the original work but expanding and detailing many of the characters and situations. In the first volume we find the newly resurrected Ikki being persecuted by the disciples of the God of Time Kronos. This narrative sub-arc will shed some light on Guilty, Ikki's terrible master on Death Queen Island and about why he was reduced to a man of pure cruelty. We also will have links to the Hades saga, the last one before the conclusion of the original manga.
I consider Time Odyssey an unmissable product for fans of the saga because it represents the icing on the cake of the Saint Seiya series, a non-profit work unlike certain pretentious reboots, but only a successful work by fans for fans.
All News