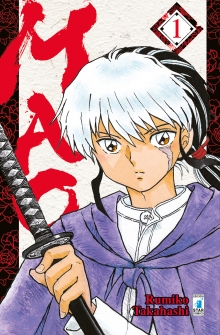 26 February 2021
A new year has begun and, after the dramatic pandemic started in the ‘20, we hope will slowly bring back a cautious normality from the lockdowns of the last few months which have also caused a delay in the deliveries of the latest materials that I had intended to review (hence my latest inaction). Fortunately, this 2021 can begin with the proposal of an author who needs no introduction as a real big shot in the history of Japanese manga: Rumiko Takahashi.
Author of some of the most famous manga (also published in their respective animated versions) such as Urusei Yatsura, Maison Ikkoku, Ranma ½, Inuyasha, Rinne as well as a series of short stories from the Rumic World universe, she boasts a tireless series of publications that have been serialized since 1978. Two years after Rinne's end, in December 2017, arrives a new manga by the author called Mao.
The story is about Nanoka Kiba, an eighth-grade girl who survived a dramatic accident at the age of 7 in which her parents lost their lives when their car fell into a sudden hole in the ground. One day, she returned with her classmates to the scene of the accident and suddenly found herself catapulted into an ancient neighborhood of the Taisho period (1912-1926). She is attacked by a mantis-shaped demon and is saved by a man named Mao who claims to be an omnyoji, a kind of exorcist. Back in her time, Nanoka discovers that a force is awakening within her that allows to develop out-of-the-ordinary abilities. Determined to uncover the mystery behind these mistic powers, Nanoka travels back to the Taisho era and begins the adventures alongside Mao and her assistant Otoya who are in search of Byouki, a cat demon who had cursed Mao.
This new series by Rumiko Takahashi contains all the classic elements seen in her stories: the parallelism between the two historical moments connected by a portal, the demons, the supernatural powers and the same characterization (also physical) of many characters. Nanoka is very reminiscent of Akane's (Ranma) traits while Mao himself is very similar to Inuyasha and everyone can find an impressive series of similarities in all the characters encountered.
The author demonstrates her majestic ability to manage these temporal leaps between the modern world and past eras, enriching history with cultural elements taken from various periods. Reading the stories of Takahashi is a bit like leafing through a history book on the Japanese cultures of the centuries to which she is referring.
Her stories have also another feature that some readers may find pleasant: the style and the way they are created is always the same, a comfort zone that never betrays and allows you to find all the elements expected from her stories.
The Takahashi is like a safe used, you always know what you are getting.
The limit that unfortunately emerges from this comfort zone is an important debt towards originality, which turns out to be one of Mao's main bug.
There are too many situations already seen in previous stories and repeated here such as the curse of Byouki (did someone say Naraku?), the passage to the other era (before it was Sengoku, now the Taisho) and you could find a lot o them, because the way in which places, characters and events are managed is always the same. In Mao, fortunately, the author has returned to continuous narration, unlike the previous Rinne which was built on single episodes, and this certainly helps to lighten the story together with slightly darker, almost horror tints, which can be notice from the beginning compared to a more fairytale narrative found in previous works.
So, if you love Takahashi's stories and her narrative style without necessarily being in search of total originality, you can't miss these new adventures. If, on the contrary, you expect the author to make a change from the past with something completely new, you will probably be disappointed.
All News