A review on the Academy of heroes, one the best contemporary mainstream shonen, recently landed on Italian television in Mediaset channels. 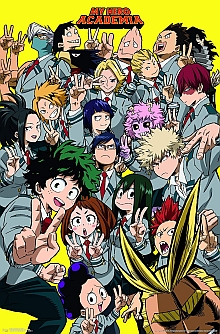 It is several years that I do not miss the annual appointment with the Lucca Comics to see the latest news of the moment. This year I actually went for another of my passions of all time, the gamebooks, who are experiencing a second youth here in Italy, but I could not ignore one of festival’s main title: My Hero Academia. It’s a classic fighting shonen that follows the old trend of historical series like Dragonball, Naruto, and Bleach together with more contemporary styles and settings.
The story takes place in a world in which mankind, thanks to a genetic mutation, has obtained the ability to develop superpowers called Quirk possessed almost by the whole population. In the society grown a new type of people called Hero who use their Quirks to defend justice from criminals, the Villains, who instead exploit powers for evil purposes. Izuku Midoriya is a middle school student who, despite being part of the rare circle of human beings without power, wants at all costs to follow the deeds of All Might, the most famous and powerful Hero ever existed and considered globally the symbol of peace. One day, due an incident by a Villain, All Might notices the courage of Izuku who, despite having no powers, decides to risk his life to save his friend Bakugo. He decides to give him his Quirk and to become his mentor: Izuku can thus enroll in the Yuuei High School, the most famous school for superheroes.
My Hero Academia is the most successful work of the young mangaka Kohei Horikoshi. The trait of Horikoshi is very reminiscent of the style of American Comics with very decisive traits and well-marked figures, almost like an animebook than of a manga.
His declared passion for Naruto, One Piece and the Marvel Superheroes is evident.
The plot is apparently trivial and starts in a very classic way with all the usual clichè of the genre: the weakness of the protagonist, the training, the school, the exams. Thanks to the addition of subframes and the arrival of the antagonists, the story reaches a good level of action able to glue the spectator to the events.
This view of the Superheroes from the author’s point of view is very interesting, although following American style they have typical Japanese characteristics. As already mentioned, the reference to Marvel is clear, but I have also found elements from literature: the Hero / Villan subdivision is very similar to that of the Ace / Joker present in the science fiction series by George Martin (known globally for Game Of Thrones), Wild Cards.
The manga series began in Japan in 2014 with the anime produced in 2016 by Studio Bones which today has three finished seasons and a fourth announced.
In Italy My Hero Academia arrived a couple of years late with the publication of the manga by Star Comics. The anime was proposed subtitled by VVVID and later dubbed and broadcast on Mediaset networks starting from September 2018 with the DVD and B-Ray publication by DynIt presented few days ago in Lucca.
I do not know if My Hero Academia will be able to have the same reputation as its predecessors, but success so far has been important and those who love series with fights and adventure will certainly find an enjoyable product.
In closing I can not miss a dedication to the fabulous Stan Lee, who died a few days ago, creator of the wonderful series of American comics that have influenced so many authors all over the world. We hope that his legacy will be carried on by young and promising artists with the same zeal that Stan has always given in all his works.
All News