Among the masterpieces of Kyoto Animation the story of a woman soldier who, after the end of war, accepts to write letters for others in search of herself and her past. 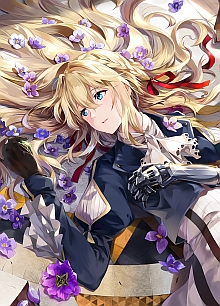 The tragedy of the arson at the Kyoto Animation study in the end of July led the animation world to remember the series of masterpieces created by many of the artists who have unfortunately lost their lives in the incident. So I decided, in memory of the victims, to recover some of their most significant works. The Kyoani catalog is really vast but instead on major titles like the various Haruhi Suzumiya, K-ON, Clannad I would like to focus on the story of Violet Evergarden.
Taken from a series of novels by Kana Akatsuki, the Anime transposition was broadcasted starting January 10, 2018 in Japan and in world simuldub (that means a foreign dubbed version released simultaneously with the original, an unusual practice for anime release outside Japan that usually occurs after months or years) the day after on Netflix.
The story takes place in the imaginary state of Leidenschaftlich on south of the continent called Telsis, in conflict with the Gardarick Empire located to the north. Violet is an orphan who during a military operation of the Leidenschaftlich army is captured and taken prisoner to exploit her incredible and untimely war capabilities. Spending her entire childhood on the battlefields she becomes completely incapable of feeling feelings of which she even ignores existence. During an accident, almost at the end of the war, she lost both arms while Major Gilbert Bougainvillea, the army soldier who had taken care of her and named Violet, is missing. After the war, unable to return to military service and unable to face a life without the major to give her orders, she decides to accept the offer of Hodgins, a dear friend of Gilbert, who finds her a job at his postal company. Here, it became aware of the service called "automatic writing dolls" (girls who know how to write well and who have the ability to put on paper the feelings of people who ask for help to express them so that they reach the heart of the recipients) asks to enter the group in order to discover human emotions and thus understand the meaning of the words "I love you", which her beloved commander had pronounced in the last moment shared together.
What immediately hits during the vision of Violet Evergarden is the fact that we’re in front of an animation product of other times, where the feelings and the introspection of the characters are the engine that moves the story. Currently almost all of the Anime, but we can easily extend also to cinema and television series, bases the story lines on action, secrets, or inner aspects aimed at pulling out the darker and terrifying sides of the characters rather than the positive part of their soul. In Violet Evergarden we return instead to the old style of the 80s (I want to mention titles like Jeanie with the Light Brown Hair, Huckelberry no Boken or The Story of Pollyanna) in which feelings, friendship and positivity are the driving force behind the protagonists through the difficulties and the inexplicable tragedies that life deserves. The awkward ways and the unconscious sweetness that she gives out to help the people, intertwining with her personal stories, enrich the narration in a continuous discovery of Violet's feelings.
Obviously there are some moments of action and drama in the flashbacks of the war and in some events involving Violet, but they are functional to the story and not forced to the sole purpose of making it proceed. The serenity mood in Violet's adventures are showed in her search of herself does not get boring, but constantly moves. And to support this setting there’s the wonderful music of Evan Call, an American who moved to Japan to make music, whose classic arrangements become a perfect frame for the story.
Despite only 13 episodes, Violet Evergarden has been enormously successful thanks to its simplicity and immediacy in transmitting certain emotions that had not been seen in animation for a while, except perhaps in Miyazaki's films.
And the Violet Evergarden project did not stop at the television series but a few days ago it was released in Japanese cinemas Violet Evergarden Gaiden: Eien to Jido Shuki Ningyo (Violet Evergarden Side Story: Eternity and the Automatic Writing Dolls), a version alternative of the story told in the television series while a sequel film scheduled for January 2020 has been postponed to a date due to the tragedy of last July.
We hope that the release of the film on Violet Evergarden, the first official release of Kyoani material after the accident, represents an excellent wish for the resumption of the Studio and that it may soon return to excite us as it has always done in the past.
All News