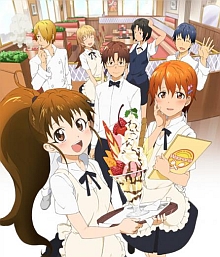 Is the quality of Anime going down?

01 April 2010
After reading some interesting debates in the last period on other similar community like HinaWorld, I want to tell my opinion concerning this topic. In several occasions coming out the issue that titles released in Japan on recent years was in many ways worse than that produced in the past. Indeed there are evidences to support this thesis: there is a continuous production of sequels, reprises and new editions of famous past works (see for example Saint Seiya and Evangelion) not to mention series which ride the waves for decades and going on again and again (One Piece, Naruto, Detective Conan). Between this titles only few have been so successful to be remembered as milestones in the history of Japanese animations and manga publishing. The explanations of this phenomenon can be manifold: economic crisis, a decline in the artistic vein that after golden years had a drop which statistically is not too unexpected, the enormous increase of the titles made by few episodes or even a handful of OAV, the focus on merchandising and fanservice rather than by the plot and characters. All real aspects to consider seriously.
The last one is the main issue which had catch my attention the most. Looking in the years 2002-2003-2004, in my opinion the period with the best production of the last two decades, is evident that now plot and characterizations are almost sketched out or otherwise reduced to a minimum importance. Each title has focused mainly on fanservice and action, leaving little role for those elements that allow viewers to get fully into the world that is presented. I can’t remember a final that could be considered good enought. Unresolved situations or an end of stories often relegated to a few phrases told by main characters or sequences of images, everything in thirty seconds, which leave only a great sense of incompleteness.
Perhaps in this case the best explanation lies in the actual crisis in the industry. The major Japanese animation studios prefer, otherwise original plot taken from manga, create many short serialization often cut in more seasons rather than investing in longer projects. Currently revenues derived from DVD sales or TV rights are essential to complete a work. The budget is often allocated in proportion to the success of a series, so a mid-season flop can also affect the overall result. For this reason the storyboards are shortened and reduced, with the consequences written above.
A good example is given by the serialization of Negima, an anime that have a great potential and it was ruined in every way possible: an awful realization of the first serie, unnecessary spin-off , and the final cut into many OAV.
So in conclusion I think it will take some years for Japan to propose back titles of great impact, we can only look forward with hope and enjoying what the current market makes available to us.
All News