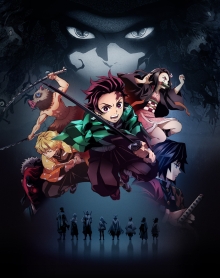 07 August 2020
As often happens when it comes to artistic expressions, if an idea of any kind is valid, the hard work always pays off, even if you don't have to do it right away. This is the case of Demon Slayer, a manga series created by the talented Koyoharu Gotoge, in her first experience as a mangaka, which began in 2016 and ended last May for a total of 23 volumes. The turning point, however, came only in April 2019 when the Ufotable studio (known for works such as Fate / Zero, Fate / stay night or God Eater) decided to make the animated series and this literally blew up the charts with Demon Slayer broking the best annual sales record, held by One Piece, in just six months!
The story is set in Japan during the Taisho period. Tajiro Kamado is the eldest son of a family who was orphaned by father and lives in the mountains. The boy takes care of his mother and children trying to sell coal in the villages and always stops to help those in need. One evening, having lingered to do some work, he stays to sleep in the house of the old Saburo, a man left alone after losing his family, who warns Tajiro from the demons that roam the woods. Back home he dreadful discovers that his family has been murdered and only his older sister, Nezuko, is still alive but seriously injured. While Tajiro takes her on his shoulder to go for help, his sister turns into a demon and attacks him. The mysterious swordsman Giyu Tomioka intervenes in the battle and claims that Nezuko was infected with the blood of a demon who turned her into one of them and that she must be killed. Tanjiro rebels and manages to awaken the dormant humanity in Nezuko who, against his demon instinct, protects the boy. Surprised by the situation, the swordsman invites Tanjiro to go to the master Urokodaki Sakonji to become a demon hunter and go in search of a way to make his sister human again.
Demon Slayer is a very classic shonen with all the elements that a mainstream series requires. The narrative structure follows the canonical cycles in which the protagonist trains, fights and defeats an enemy and becomes stronger, trains again and defeats the next enemy, gradually until the end. One of the strengths of the story is its lineal and dry plot which alternate quite moments and fight to the death where the tension uprise. However, this turns out to be one of the weakest points since the lack of subplots and the development of some secondary characters would certainly have enriched the narrative of important elements. However, it should not be forgotten that this is the first serialization of Gotoge, some flaw of inexperience is certainly to be forgiven. In fact, the manga series is also quite marked by the change in the stroke and in the drawings, which becomes more and more mature and detailed after each chapter, however losing some initial characteristics that perhaps made it a little less "standard".
I think that there is some analogies and references to another rather famous series on demons, Inuyasha, maybe because it’s quite famous. However, the parallelism between the figure of Naraku and Muzan Kibutsuji is evident.
The anime version has had the advantage of improving some of the defects related to chara design making it more homogeneous and enriches the narration with the splendid animations created by the Ufotable studio under the skilful direction of Haruo Sotozaki (Tales of Symphonya) who manages to elevate everything to another level with truly exceptional fluidity and detail.
The soundtrack is also not secondary with the beautiful music created by GO Shiina and Yuki Kajiura which thanks to folk elements such as koto, shamisen, drums and flutes immerse us in Japan Taisho (recalling historical OSTs such as those of Naruto).
If you are looking for a good mainstream series that does not get lost in too many frills, Demon Slayer is definitely for you.
All News