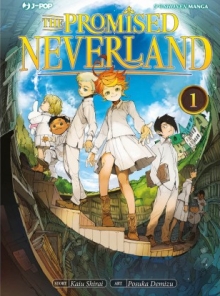 18 June 2020
We often came across films and television series defined "survivor series" where the protagonists find themselves in apocalyptic and dystopian scenarios where on which their survival is theaten by an impending danger. Even Japanese manga/anime are familiar to this type of narrative that includes the most disparate series of subgenres: I remind titles such Battle Royal, Shangri-la, Limit, Highschool of the Dead and many others that I certainly forget.
In recent times The Promised Neverland is a new title which, despite being a classic example of survival manga, I found very interesting for the presence of some atypical elements.
The story takes place in an orphanage of typical Victorian architecture, whose geographical location is unknown, where several young people live in a daily life flowed peacefully between games, rest and some aptitude tests. They love to call themselves brothers and Madame Isabella, the housekeeper of the orphanage, is affectionately called "mother" by all of them. From the orphanage it is not possible to know or see the outside world because the area is surrounded by a huge fortification which children are prohibited from approaching. One day a six-year-old girl named Conny is taken up for adoption by a family and is about to leave the facility but by mistake she forgets a puppet she was very fond of. Emma and Norman, two 11-year-old boys and among the oldest in the institute, decide to secretly bring the puppet back to her before she goes away and arrive at the large forbidden gate that leads to the outside. Here, inside a truck, they discover Conny's dead corpse and, still terrified, they hide under the vehicle hearing the voices of someone who is approaching. The horror increases when the boys see two demons who have come to take Conny's body for eating it and find that the orphanage is actually a farm destined to raise children to feed the demons. After revealing the disconcerting truth to Ray, another peer and one the most intelligent of the orphanage, the three boys decide to join forces in attempt to escape for saving their lives and that of the other orphans.
The manga is written by Kaiu Shirai and designed by Posuka Demizu, two emerging Japanese artists, who have combined some characteristics of the survival genre contaminating them with different elements. The plot and the development of the story are in fact very intriguing, being a sort of psychological dramatic thriller with more yellow-police shades where the boys enter into a clash with their adoptive mother, similar to a chess game, which in some ways brings a lot to works like Death Note.
The strategies adopted both protagonists and antagonists between escape attempts and the search for news about the world outside the orphanage opposed to the mother's control over orphans, in order not to be a victim of demons in turn, wrap the reader in a series of breathtaking cliffhanger.
The choice of chara design of the Posuka Demizu mangaka is also very particular and recalls a perhaps more western style while not neglecting the typical manga traits. The presence of children as protagonists of the story necessitates a careful evaluation of the explicit contents and, even in this case, the mangaka was very skilled. The scenes do not present useless elements of fanservice, which would perhaps have helped to capture some more readers, and not even the free splatter. The expressions of the characters, with facial features sometimes accentuated to almost deformed, make the protagonists' feelings of anxiety and fear very vivid.
The only flaw in the series turns out to be the quality level of the story that begins to drop after the first narrative arcs, not quite as fresh and intriguing as the beginning of the story.
The series ended just last Monday on Weekly Shonen Jump for a total of 181 chapters collected in 20 volumes and have also two spin-off light novel and a 12-episode anime version released in 2019.
If you are looking for a series with dark and intriguing outlines, The Promised Neverland has all the attributes to get you passionate, even if, perhaps still complicit in being the first experience of the authors in this field, it will not be remembered as a masterpiece of its kind.
All News