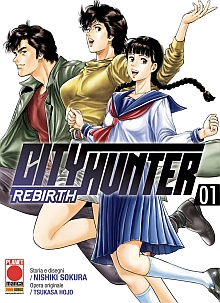 20 January 2020
A new year has begun and there’s no time to turn gaze to the upcoming news that I am still going to discard what was found under the christmas tree. The past year has ended, leaving us many welcome returns that never seem to sunrise. If the serializations of Netflix, including the long-awaited one of Saint Seiya, did not leave particular enthusiasm, the response on another great classic was different: City Hunter. Last September City Hunter Private Eyes, the latest animated film dedicated to Ryo Saeba and Kaori, arrived in Italian cinemas with just over six months away from Japan.
And after a few weeks, a spin-off manga called City Hunter Rebirth (original title Kyo Kara City Hunter, or "City Hunter starting today") arrives on the shelves.
Kaori Aoyama is a forty-year-old single who has always been a huge fan of City Hunter manga that knows perfectly. One day, while waiting for the subway, she slips on the tracks and is hit by the convoy. Mysteriously, she wakes up again as a young girl and, having gone to a police station, appears not to exist on any registry. Desperate, she runs into Ryo Saeba thus discovering that she has inexplicably ended up inside the manga. Pretending to be called Saori and having lost her memory, she is finally hosted by her idol in person together with the inseparable assistant Kaori. Aoyama thus finds herself reliving the adventures of the manga in which she, already aware of the existence of the story, will find herself interacting with the events creating a great confusion and risking to reveal who she really is.
The manga is designed and written by Nishiki Sokura who, based on the original screenplays by Tsukasa Hojo, traces the history of City Hunter through the eyes of a passionate fan who revisits the most important moments of the saga. This spin-off does not shine with particular originality, however it manages to retrace some stages of the original masterpiece of a mixture of amarcord and situations that are partly unpublished and really pleasant.
The stroke is very accurate and inspired by the original chara design so as to no longer notice the differences as soon as you immerse yourself in reading. The sense of belonging with the original work is rather marked and allows you to feel "at home" page after page.
Aoyama's meeting with Saeba takes place while Ryo finds himself in spite of being entangled in the love story between Miki and Umibozu: Falcon will agree to marry the latter only in the event that the girl manages to kill Saeba. From here resumes the narration parallel to the original story which is enriched with details and subplots related to the presence of the new arrival.
Each encounter with the various characters (such as Saeko and Reika) becomes a catwalk where you can relive an already known story by once again assisting your darlings in facing the dangers of their profession. Reading flows pleasantly and one finds oneself laughing and having fun just like with a dear friend who has not been seen for a long time.
The weak point of this kind of spin-off is that it is essential to have read the original work at least once: the quotes, the jokes and the moments of suspense only work if the reader is already aware of what should happen. For this reason, the manga is suggested only to those who are passionate about the original story, not to those who approach it for the first time.