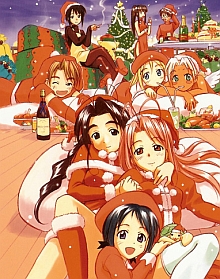 24 December 2018
The Christmas festivities are one of the busiest times of the year not only in the Italian tradition but also in the European and American ones. The celebration of the birth of Jesus, in spite of a decline in the traditions that has grown in recent decades, remains one of the most heartfelt recurrences between own life reflections at the end of the year, meetings with relatives and opportunities for reconciliation. The spirit that is breathed during Christmas is something special that involves believers and non-believers.
But how japanese feels Christmas and what significance do these holidays have for them?
In Japan the December 25th is a common working day, in fact Christmas is not considered as national holiday because is not part of the Japanese tradition. A small percentage of the Japanese population (about 3%) is Catholic or Christian and the rest of the country lives those days as normal school or office daylife.
In Japanese there is no word "Christmas" and therefore they use the english transliteration "Merry Christmas" to exchange greetings.
The date of December 23rd is where the Tenno Tanjobi, the Emperor's birthday, is celebrated. The day of the Emperor's birth is a national holiday but this was the last year in which will be celebrated towards Christmas, the current emperor Akihito announced that in April 2019 he will abdicate in favor of his son Naruhito and so the party will be moved to February 23rd.
However Japan has absorbed the consumerist part of the Christmas holidays: the tradition of exchanging gifts in the family is deeply felt and the cities are filled with lights and festive decorations. One of the most particular customs of Christmas Eve is the KFC fried chicken dinner that has been repeating itself for over forty years, to be precise since 1974 when the KFC made a very effective marketing campaign played on its initials that reported " Kentucky for Christmas "as a direct reference to Kentucky Fried Chicken. The success was such that it became a real tradition so that on the evening of Christmas Eve it is impossible to find a table in a KFC restaurant without having book it in advance.
The Christmas Cake is another culinary tradition of the Christmas period, the paistry prepare this cake made with sponge cake, strawberries and whipped cream decorated with references to Santa Claus that literally snapped up.
Christmas Eve is considered a recurrence to spend with partners rather than the family, a sort of early Valentine's Day. The Tokyo Tower is one of the most popular places for appointments: it is believed that the couples who are under the tower when the lights are on must declare themselves eternal love. Lovers can also attach a ribbon to a special Christmas tree on the tower's observation deck.
On the other hand the New Year is different because for the Japanese is one of the most important holidays of the year. The day is spent in the family devoting himself to the practice of hatsumode, the "first visit of the year to the temple", where you go to one of the Buddhist temples or a Shinto shrine to pray to a peaceful new year.
At the stroke of midnight on December 31st throughout Japan the temple bells ring 108 chimes to exorcise the 108 human sins according to the Buddhist beliefs while in the days before it is usual to do the house cleaning (like our spring cleaning ) and pay off any debts accumulated during the year.
So here is a brief account of the Japanese holidays that despite being imbued with a certain modernity keep alive the history, religious beliefs and traditions of a people that I think are important values to preserve in recent drift.
In the hope that you can all spend a peaceful Christmas I make you all the best wishes for happy holidays and a happy new year!
All News